Happy Thursday, everyone! Today’s blog post is about how we introduced and prepared our two dogs for having a baby in the house. One of the first questions people ask us is how the dogs like and act around our son and the answer is simple, they LOVE him! Both of our dogs are protective over the baby but they also know he’s a little person and to give him some space right now.

Before Landon was born, we made predictions of how we thought each dog would react to adding another person to the family. We assumed our husky would be protective while our younger chow chow mix would be jealous of all the attention given to our son…since he would no longer be the baby of the house. Our predictions were correct.

Although it took our chow mix a bit longer to warm up to Landon, both dogs now love their baby brother and are very protective of him. When my mom was visiting and holding the baby, they followed her everywhere around the house to make sure he was okay. Here’s a few things we did during my pregnancy and before we brought the baby home to help prepare our dogs for our newest addition:

Play Baby Sounds Throughout the House

This is something I did periodically in the months leading up to Landon’s arrival. I would just go on YouTube and find videos of babies crying or laughing and play it in different rooms of the house. At first, the dogs were confused and would start to bark or whine when they heard these sounds. Whenever they would whine, I would just hush them and reassure them that everything was okay. After about a week of doing this, they just ignored the noises. This was a great preparation technique because now they don’t make any sounds when the baby cries late at night.

Allow Them to Smell/Watch Us Organize Baby Clothes

When it was time to organize the baby clothes, I allowed the dogs in the room to sniff around and see the tiny outfits. This helped them to understand that something might be changing soon. They knew not to go into his room without one of us in there with them.

Bring in a Hospital Blanket with Baby Scent

Before we brought Landon home, my mom took one of his hospital blankets back with her for the dogs to smell. This prepared them for the arrival of their baby brother when we brought him in the house. All the things we had heard told us that whoever the dogs favor more should not be the one holding the baby at the first meeting. As upsetting as it is to admit, my husband is the favorite so he went inside first while I followed holding the carseat. The dogs were in their crates and were a bit anxious as I brought a new person into the house. We slowly let them out, while holding tight to their collars, so they could get a bit closer to sniff the baby. After that they would just follow us around the house to watch and see who this additional person was.

It took our dogs about a week to fully be comfortable around Landon, once they realized he was a permanent addition and wasn’t leaving. Anytime a visitor they didn’t know would come over, they would make sure they were always around them watching carefully as they held their baby brother. I absolutely cannot wait to see all three boys playing together once Landon gets older! 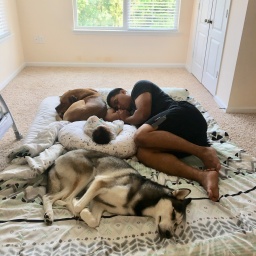 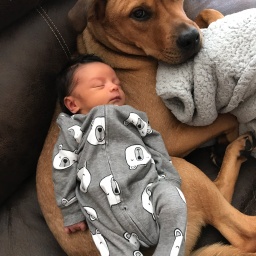